Get a bargain breakfast at Braum's 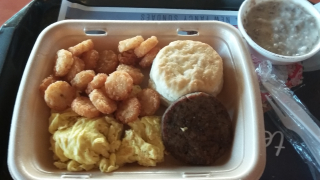 I've never had breakfast at Braum's before and boy do I regret waiting so long to do so!

For just $3.69 you get two eggs scrambled, sausage, hash browns, a biscuit and sausage gravy.  Eating in, my breakfast was served up quickly, my number being called just as I had finished gathering a few napkins, some plasticware and finding a table to sit at.

Just look at that generous portion of taters, which were seasoned perfectly.  The eggs were fluffy, the biscuit was flaky, the sausage had good flavor and that gravy was loaded with sausage and had a real nice note of black pepper.  I washed it all down with a medium orange juice and leisurely enjoyed reading the newspaper to boot.

This was a big breakfast, totally satisfying and Bachelor on the Cheap wallet friendly.  The meal and the juice cost me a total of $5.68 and I would challenge you to find an equally portioned and delicious breakfast at that price anywhere else.  Other fast food/fast casual breakfast platters pale in comparison.

The Braum's Big Country Breakfast gets 4 out of 5 Bachelor on the Cheap stars, it's a repeat buy for sure!

Braum's is a regional, family owned restaurant chain with nearly 300 stores in Oklahoma, Texas, Kansas, Arkansas and Missouri.  The Braum's visited on this occasion is located at 1261 S Rock Rd, Wichita, KS 67207.  The service was fast, friendly, the dining and self-serve areas super clean.  Thank you Braum's, totally enjoyable breakfast!