Here's the promo write-up from Wendy's: 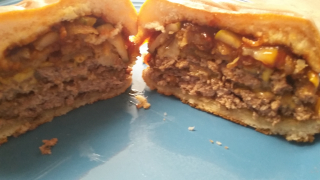 Barbecue Cheeseburger: Wendy's has long understood what makes barbecue taste so great. Now, the Barbecue Cheeseburger finds that backyard balance of sweet and heat, with a touch of smoke. The cheeseburger is complete with two slices of American cheese, crispy fried onions, three juicy pickles, and fresh, never frozen beef. To top it off, it's smothered in a sweet and smoky Kansas City-style barbecue sauce that delivers familiar and comforting flavors, making it a top-contender for craveability.

This was a good burger, but not something I've going to crave moving forward.  It satisfies all the basic BBQ elements, the beef was cooked nicely, the crispy fried onions provided a nice texture element, there's the classic tartness of the pickles and I will say that BBQ sauce had a nice twang to it, it's NOT run-of-the-mill stuff.  It's a notch above what Wendy's competitors are serving. The toasted bun was nice as well but nothing extra-ordinary.  This sandwich is missing something to truly make it a top-contender for craveability.....  BACON!  Put some bacon on that sandwich and I would buy it again.  But without bacon, sorry Wendy's, it's not a repeat buy.

The Wendy's Barbecue Cheeseburger cost me $6.76, an average price for what fast food/fast casual is offering in the Smokehouse/Steakhouse flavors trend.  Good but not great, I'm giving the burger 3 out of 5 Bachelor on the Cheap stars.  This burger is not as good as competitor versions of a BBQ Cheeseburger and it's not 'Made to Crave.'  What Wendy's has put out there for public consumption is a let down.  They can do better than this and based on this tasting, I'm not too anxious to try the other two new burgers, the S'Awesome Bacon Cheeseburger or the Peppercorn Mushroom Melt.