Consumers are clamoring for something more, creations beyond the ordinary realm of classic burger and sandwich flavors.  People want smokey, they desire more than just ketchup and mustard, folks are calling for cheeses with deeper flavors and buns with a little more tease than run-of-the-mill sesame seeds.  And it's no different when it comes to other meat on bread options, a.k.a., pizza, consumers are looking for more, something beyond the traditional flavors. 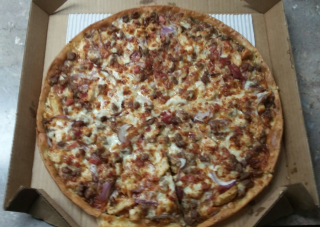 Tonight for dinner I opted for another 'other' meat on bread option, deciding on a BBQ pizza from Pizza Hut.

Pizza Hut doesn't have a BBQ version for a Meat Lovers pizza on the menu, but you can customize your own pizza to create one.  Here's what I crafted using their online menu for a carry-out order: 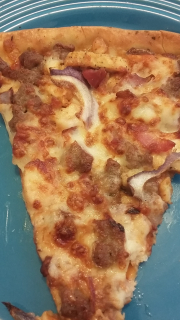 The pizza was baked to perfection, the garlic buttery thin and crispy crust was the perfect platform for the BBQ meats, which were nicely portioned and seasoned well.  The grilled chicken was a tad dry, the red onion portion was a bit sparse and the honey bbq sauce was really nothing special, but over all, every bite of this pizza was enjoyable, tied together nicely by that golden, brown and delicious cheese.  It was a superior pizza to what Papa John's calls a BBQ Meats pizza.

Ordering a large, my pizza cost $22.56 after tax.  That's not a Bachelor on the Cheap wallet friendly price but it was pretty tasty and I've got leftovers.  And while the smokehouse/bbq style flavors were there it's not a repeat buy, the price is cost-prohibitive.  Pizza Hut's BBQ Pizza using their 'Create Your Own' feature online gets 3 out of 5 Bachelor on the Cheap stars.  It's better than Papa John's if you're in the mood for BBQ pizza or have never tried one before, but for me it's not worth buying again.