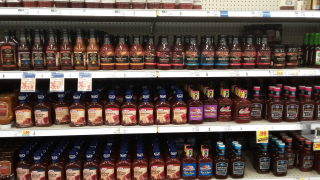 In the coming weeks, I'm going to be sampling it all, making comparisons and letting you know what I think the cream of the crop is. Will it be KC Masterpiece? Sweet Baby Ray's? Stubbs? Something else?

In my first tasting challenge, I sampled KC Masterpiece and Sweet Baby Ray's.  You can read that review here. 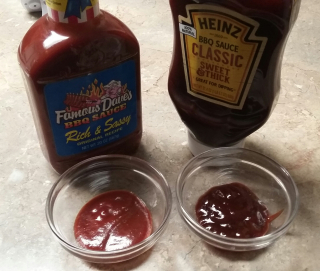 The meat vehicle of choice to take these sauces on a test drive is a Monster Thickburger from Hardees.  I chose the Monster Thickburger because it's a burger I recently reviewed that really needs some doctoring to make it better and there's nothing better to doctor a burger with than BBQ sauce!

I cut the Monster Thickburger in half and applied the two respective sauces equally on each half.  Let the better half be eaten.

The commentary on the bottle boasts of how the Heinz Barbecue team traveled the country and talked with pitmasters to bring us a sauce that captures the real flavors of barbecue.  Did they only talk to the losing teams then?  Because this sauce sucks.  It's a KC BBQ style sauce that is just too heavy on the sweet.  The first ingredient listed on the label is cane sugar, I'll give them kudos for using a natural ingredient rather than high fructose corn syrup, but goodness gracious - sugar is your first ingredient Heinz?  It's overpowering.  After taking the bite of the Monster Thickburger half dressed with this sauce, I immediately put it down, wondering how I was going to further doctor it to make it edible.  The burger was actually better WITHOUT the sauce!  Costing me $2.49 for a 21.4 ounce bottle, the best thing about this sauce IS the bottle!  It's the upside down kind, easy squeeze.

I'm giving Heinz BBQ Sauce Classic just 1 out of 5 Bachelor on the Cheap stars.  The price is actually quite reasonable, but it's a garbage sauce and definitely not a repeat buy.  Kids will probably like it because it's that damn sweet, but if you really have a passion for BBQ, this sauce is insulting. 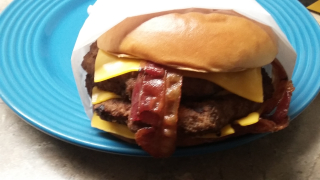 The Monster Thickburger from Hardee's

If you know anything about BBQ, you know that Famous Dave's is renowned for winning on the competition BBQ circuit, touting more than 700 awards from a variety of contests nationwide, awards for Famous Dave's meats, desserts, his sauce, his catering business and his restaurants.  So it comes as no surprise that this is a good sauce.  It's a nicely balanced sauce hitting all the right notes, the tomato, the spice which is smartly offset by the sweet, you get the twang of the vinegar and here's what sets this sauce apart, the pineapple juice.  It's a refreshing kiss of tart.  There's a hint of honey in there too, making for a really nice saucy bite.  Needless to say, this is the Monster Thickburger half I enjoyed most and finished.   That Heinz half went in the fridge after one bite, I'll attempt a rescue later.  Costing me $3.19 for a 20 ounce bottle, Famous Dave's BBQ Sauce is reasonably priced

and is a repeat buy.  I'm giving it 3 out of 5 Bachelor on the Cheap stars.  It's a very respectable sauce, but there are better sauces out there.