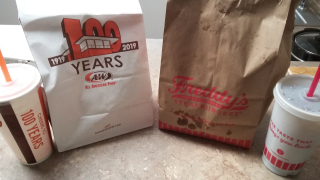 Regular readers know that I'm currently conducting a Smokehouse/Chophouse Challenge, because trending in 2019, are smokehouse/steakhouse style burgers, sandwiches and other meat on bread offerings from fast food/fast casual.

I ventured out today wanting to sample Freddy's A-1 Chophouse burger, which is two lean ground beef patties pressed thin and topped with grilled onions, sautéed mushrooms, and white cheddar cheese. The burger is drizzled with a zesty A.1.® and garlic sauce, and served on a home-style bun.  Unfortunately, my timing is off, the restaurant has just recently taken the limited time offer item off the menu.  It's an annual thing and will be made available again later this year. 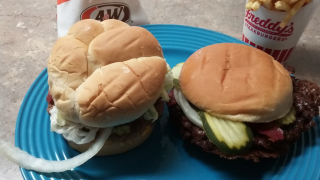 That eliminates Freddy's from the Smokehouse/Chophouse challenge.  I know their marketing folks think they know what they're doing, playing the McRib game with limited releases, but I believe Freddy's is missing the boat here.  The trend towards more upscale burgers, sandwiches and other meat on bread options and smokehouse/chophouse flavors is unquestionable.  To not have something along those lines on the permanent menu is a mistake in my humble opinion.  And with that and my Smokehouse/Chophouse challenge in mind, I was surprised to learn that A&W doesn't have some kind of smokehouse offering on their menu.  The closest they come is a classic bacon cheeseburger.  So in striking out at Freddy's with the A-1 Chophouse no longer available, I ordered a Bacon Double Cheeseburger to go.  And on the way home and an A&W along the route, I stopped there too and picked up one of their Bacon Double Cheeseburgers for a little side battle, a break if you will from the Smokehouse/Chophouse Challenge. 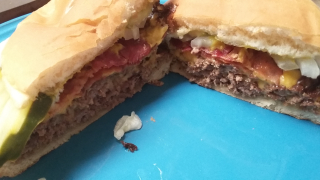 Cross section of the Freddy's Burger

Who makes the better burger?

A&W (first opened in 1919) is an iconic restaurant that's fading in popularity, while Freddy's (first opened in 2002) is an up-and-comer experiencing growth nationwide.  They have similar menus, offering burgers, hot dogs, chicken sandwiches and frozen desserts.

I ordered combo meals from both establishments and here's how it played out:

A&W's description of their Bacon Double Cheeseburger:  This is a full 1/3 pound of 100% U.S. Beef, each juicy patty with its own slice of American cheese. Topped off with crispy hickory-smoked bacon, lettuce, tomato, onions and pickles on a lightly toasted bun.  The combo included medium fries and a drink.   The meal rang up at $7.84 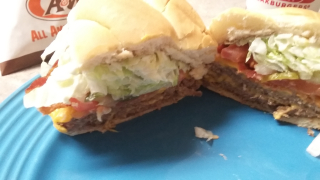 Cross section of the A&W burger

I sampled both burgers, first biting into the Freddy's offering.  Picking the Freddy's burger to bite into first was a visual thing I suppose, while the A&W burger was taller, the Freddy's burger was bigger around, with those patties peaking out from the edge of the bun.  So how did it taste?  The steakburgers were seasoned well but the thin patties weren't juicy.  I got some nice tartness from the pickle and mustard, the onion and bacon provided some nice texture and slight crunch.  The toasted bun was a nice fluffy platform and the melted American cheese slices tied everything together.

Next, I bit into the A&W burger.  The thicker patties were seasoned well and juicy.  This burger, while sharing very similar and equally good ingredients (bacon, onion, pickles) to the Freddy's version, also included lettuce and tomato which provided for a nicer, refreshing finish.  It's a classic combination of ingredients and this is the burger that I finished for lunch, putting the Freddy's - minus one big bite - in the fridge for later.  A&W makes a better bacon double cheeseburger.  Juicier patties + lettuce & tomato =  a better bite.

A&W also has the better fries.  Don't get me wrong, the Freddy's fries aren't bad and I love the seasoning, but I'd rather have full size fries and not the shoestring variety.  I know, a lot of people love 'em, but like a thin patty not being juicy, shoestring fries don't exactly lend themselves to being crispy on the outside and fluffy tender on the inside...  Shoestrings tend to be more crispy, rather than a nice balance of crispy and tender inside.  The A&W fries, full size fries, had that balance and the seasoning salt A&W puts on their fries isn't bad either, it's not quite as good as Freddy's, but it's pretty close!

Both meals were Bachelor on the Cheap friendly, with pricing falling into the typical fast food range of $7 - $9 for a sandwich, side and a drink.

I'm giving the Freddy's Bacon & Cheese Double Steakburger  3 out of 5 Bachelor on the Cheap stars.  It's a borderline repeat buy.

I'm giving the A&W Bacon Double Cheeseburger 4 out of 5 Bachelor on the Cheap stars.  Not only was this the better burger of the two, it also has the better price!  It's definitely a repeat buy.

Both restaurants need to step up their game and put a smokehouse/chophouse sandwich on their permanent menu.  Consumers are demanding it and if they want more market share......  'jus say'n...