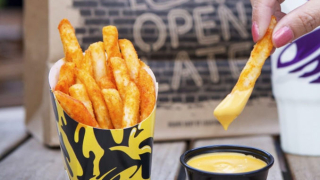 Beginning January 24, Taco Bell is bringing back their Nacho Fries for a limited time.....  Which is probably a good thing because "Nacho Fries" ain't all that.....  They flat out don't live up to all the hype in my humble opinion.

This is the third time Taco Bell has put this item on its menu.  The fries first appeared on the menu in late January 2018 and the company boasted of big sales for the new offering, saying roughly 7,000 Taco Bell restaurants sold more than 53 million Nacho Fries in the first five weeks.  I chalk those numbers up to curiosity for the most part.  The fries were listed on the restaurant's Dollar Menu, but they pulled it soon after that brief unveil.  Hmmmm.....   Taco Bell then put it back on the menu in sort of a McRib fashion in July...... for a limited time and for $1.29, not a buck.  The company didn't boast of the sales numbers in that second release.

They'll cost you $1.29 this go-around too, as Taco Bell has retooled it's now defunct Dollar Menu, which is now called the Cravings Value Menu, a menu featuring 20-plus items ranging in price from $1 to $5.

Here's my take on these fries: