Sonic has responded to the call from consumers who have been demanding those smokehouse/steakhouse style burgers and sandwiches.  The company's response, unveiled in late November 2018 and what looks to be a good seller for them in 2019:  The Sonic Steakhouse Bacon Cheeseburger. 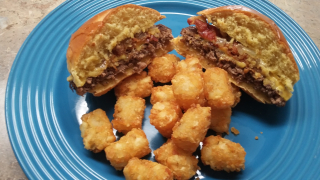 It's a good burger, not great, but good.  It hits the steakhouse style notes, the beef was seasoned well, the cheese melted nicely, the bacon was crisp and those grilled onions and black pepper mayo brings it all home.  But I could do without the toasted brioche bun.  It was a bit on the dry side and the topper was actually too much bun.  Perhaps the bun wasn't as fresh as it could have been, but even if fresher, it's still too much bun.  A regular bun would have been just fine and would actually make for a better burger to bun ratio.   Put this sandwich on a regular butter toasted bun and you have a 5 star sandwich.  With the brioche, it's a 4 star sandwich.  I know fast food joints are trying to upscale their burgers and sandwiches in responding to consumer demand, but sometimes, restaurants try to do too much.  I purchased my Steakhouse Cheeseburger and medium tots for just $4.99, which after tax meant $5.36.  That's Bachelor on the Cheap wallet friendly and the meal is worthy of a repeat buy. 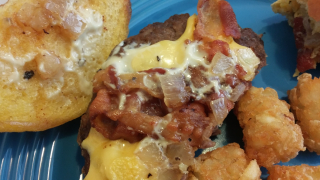