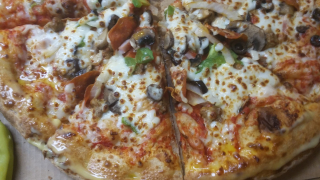 Pizza Hut was an option, their pizza is above average, but I hate their online ordering and the delivery from my neighborhood Pizza Hut is SOOOOOO slow and lately the product has been inconsistent.

Domino's, despite being right around the corner from my apartment, was NOT an option.  I hate their pizza, it flat out just sucks.

Gambino's, which makes GREAT pizza and delivers, sadly, wasn't an option because unless you have a coupon, their pizza unfortunately can be a bit pricey.  The only coupon available was for a large one-topping pizza for $8.99, but I was in the mood for a loaded pizza.....

The last option available to me was Papa John's, so to the Papa John's website I went.

"Maybe they changed a few things since John Schnatter got the boot, maybe the pizza is better," I kidded myself. 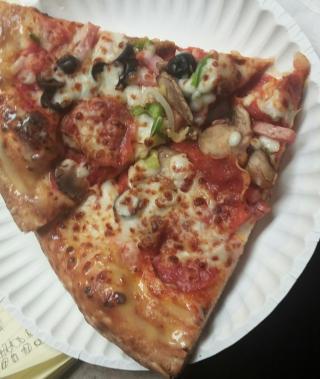 I ordered a large "The Works" on original crust.  The description from the Papa John's website:  It’s everything you want on a pizza – and then some. A heaping helping of premium pepperoni, julienne-cut Canadian bacon, spicy Italian sausage, fresh-sliced onions, crisp green peppers, mushrooms and ripe black olives. When you’re hungry for a hearty pizza, the Works always works.

I've never had "The Works" from Papa John's and it was exactly what I was in the mood for.  Perhaps this particular pizza would change my mind about Papa John's...  When I'm craving that kind of pizza I typically do a carry-out order for a very similar pie from Gambino's, pizza that rocks, but that pie, plus delivery, plus tip would cost almost $30 without a coupon.

I like the Papa John's website, it's easy to navigate, easy to order, there's no annoying/multiple prompts forcing you to buy more stuff (Pizza Hut).  When you complete your online order, you are then taken to a page that shows the status of your order, from making, baking, boxing, delivery of your pizza.  My pizza was to be delivered at 9:38pm.  It's a nice feature and it's accurate.  The delivery driver pulled in out front right on time.  I paid $23.39 for the pie, that figure includes tax, delivery charge and tip.

The pizza looked great in the box, smelled good, I took that first bite with high hopes for "The Works".......

It's still average pizza.  To me, the foundation to a great pizza is the crust and the sauce.  Put all the nice toppings and melty cheese on it you want, but without a top notch crust and sauce, you've just got average pizza.  Papa John's likes to put that little container of garlic butter dipping sauce in the box, which I put on the crust, adding more flavor.  But think about that, a good, already flavorful pizza shouldn't need to have more flavor added!  All-in-all, I was eating an average pizza.  Way better than Domino's, better than Little Caesar's, a notch below Pizza Hut but here's the tell, I'd rather have eaten a Casey's pizza than the Papa John's, a pizza that just pales in comparison to Knolla's or Gambino's.

I'll give Papa John's three out of five Bachelor on the Cheap stars, but only because I don't do half stars.  I like the website, I like the timely delivery, the pizza though - "eh."  I paid too much for an average pizza.  It's NOT a repeat buy.