Consumers are clamoring for something more, creations beyond the ordinary realm of classic burger and sandwich flavors.  People want smokey, they desire more than just ketchup and mustard, folks are calling for cheeses with deeper flavors and buns with a little more tease than run-of-the-mill sesame seeds.  And it's no different when it comes to other meat on bread options, a.k.a., pizza, consumers are looking for more, something beyond the traditional flavors.

After recently having some 'Spicy Brisket Flatbread' from Schlotzsky's, I decided to expand on that and venture into the world of BBQ pizza.  My choices of the major chains on the list to try are:  Little Caeser's, Papa John's, Pizza Hut and Domino's.  I went with Papa John's on this occasion. 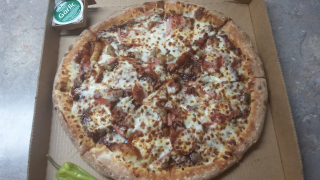 All those meats are indeed present and flavorful and my first bite was pretty darn good, but as I got into it, none of those meats were exactly generous in portion.  The meats were ample in the center of the pizza, but grew sparse as I worked towards the outer crust.  I will say I've never had pepperoni in a BBQ dish before or Canadian Bacon for that matter and they were both quite nice.  The BBQ sauce while descriptive in name was nothing special, the cheese was ample, golden, brown and delicious but that crust, it's still the Papa John's crust - it needed to be dressed with that complimentary garlic butter - making this.....  An average pizza.  It was good, don't get me wrong, but nothing wow about it. 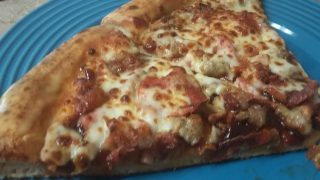 It's a nice change of pace pizza if you're craving something a little different in a pie, but I'm giving the Papa John's BBQ Meats Pizza 3 out of 5 Bachelor on the Cheap stars.  It cost me 23.39, including delivery fee + tip and so it wasn't exactly Bachelor on the Cheap wallet friendly either.  It's not a repeat buy.  I'd rather spend around $9 for a smoke house style burger and fries.