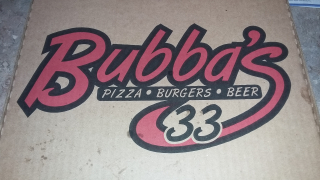 In an effort to drum up some business for the restaurant, a representative from Bubba's 33 dropped off a pepperoni pizza recently to a co-worker and I, what a nice surprise and there is no better way to get the word out on your pizza joint than a free tasting!

From their website:  Bubba’s 33 was created in 2013 by Kent Taylor, Founder of Texas Roadhouse restaurants. Kent’s vision was to create a restaurant where families, friends, and sports teams could gather to enjoy a lively atmosphere without sacrificing quality food. Bubba’s 33 is just that – a place for all things American – food, family, sports, and beer!

A relative newcomer to the pizza and burger scene, Bubba's 33 restaurants have now opened up in 13 states.

"So who cares when they opened, how is the pizza?" you ask... 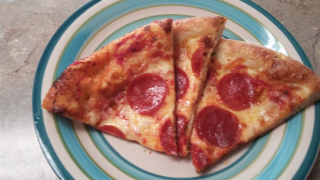 The scratch made hand tossed crust is phenomenal!  It was baked to perfection and had that light, flaky, crunch on the outside and fluffy deliciousness on the inside with every bite.  The sauce was seasoned nicely, the blend of cheeses was portioned well and had a perfect melt.  The only knock I've got on this pizza is the pepperoni portion.  It was good pepperoni, but I didn't get pepperoni in every bite.   This was a well balanced pizza, hitting all the classic flavor notes you expect from a good pepperoni pizza and it motivates me to make a visit to Bubba's 33.

Oh, and apparently the "33" in Bubba's is a reference to how cold their beer is, 33 degrees!

Bubba's 33 pepperoni pizza gets 4 out of 5 Bachelor on the Cheap stars.  You can't beat the price (free!) and the pizza was quite tasty, the crust was top-notch!