It can be kind of tough while on a road trip trying to find something a little bit different from the typical burger, slice of pizza or deli sandwich to have for lunch.

Having a little vacation time and spending that on a private lake in Missouri, I stopped in a Hardees for lunch after catching a few fish and decided their mushroom Swiss burger would be a nice change of pace. 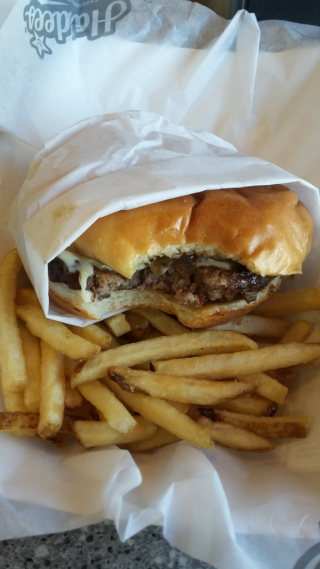 This burger was stellar, the Black Angus beef patty was cooked to perfection, nice and juicy, the cheese was melted nicely, there was an ample amount of mushrooms, but what put this sandwich over the top was the sauce!  I'm here to tell you, the only thing Hardee's is missing with its burgers is a beer menu, because they crank out some really nice burgers, but the price for that upscale flavor is a bit high, we're talking fast food after all.  Both the Hardee's Frisco and the Mushroom Swiss are nice change of pace burgers.

I paid $9 and change for a combo meal and with that in mind, the fries were very tasty, just out of the fryer, seasoned well, those slightly skin-on fries being an excellent compliment to the saucy burger that I didn't want to put down.

The Hardee's Mushroom & Swiss Burger, like the Frisco, gets three out of five Bachelor on the Cheap stars.  Tasty, but a bit pricey, for nearly $10, I just need a beer to go with that burger.