BACKGROUND:  Evan Williams is bottled and sold as a Kentucky Straight Bourbon, considered by many to be a knock off of Jack Daniels and being a knock off, available at a cheaper price.  A fair amount of bars utilize Evan Williams as their house whiskey. 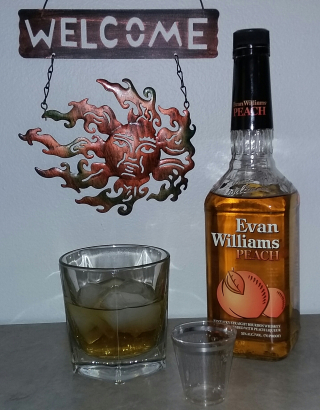 Now about their peach bourbon......

I'm not a fan.  It's VERY peach forward, as in too forward, I might as well have been drinking peach schnapps!  It's like the makers literally just poured a couple shots of bourbon into a peach schnapps bottle and called it a blended, flavored whiskey.  The nose is peach, the taste is peach, the finish is peach with just an ever so slight hint of bourbon.  I tried it neat, I tried it on the rocks and I was flat out disappointed with each tasting.  It's SO peachy, I think it might be best served over vanilla ice cream.   I wanted a peach flavored bourbon, not a peach schnapps with just a hint of bourbon in it.

Mix it with some peach iced tea and you’re golden!