Pizza - Perhaps the greatest food invention ever and I don't know about you, but I don't know anybody that does NOT like pizza.....

So who makes the best of the cheap frozen variety?  How will your preferred brand stack up?

I like pepperoni, it's my go-to for a pizza topping and my favorite pizza combo is a thin crust, pepperoni, mushroom, onion, with extra cheese.  You won't find that combo in grocery stores, so with that in mind, part of this review/evaluation of pizzas is the ability to doctor it, as in add your favorite ingredients.  Lord knows the bargain basement brands don't exactly get crazy with copious amounts of meat and cheese.  A lot of folks 'doctor' pizzas before placement in the oven and I'm here to assist with that.  No, that doesn't mean I'm a pizza nurse...  Don't go there..... 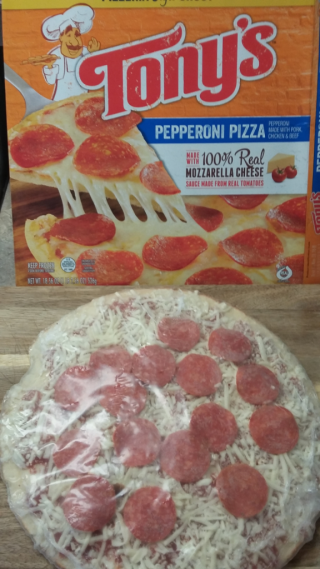 It's Day Ten of the challenge and I'm reviewing Tony's, a maker of frozen pizza since 1960, this frozen pizza icon getting started in of all places, Salina, Kansas.  In a quick review of the fine print on the box, my expectations are this won't be a bad pizza because the parent company is the Schwan Food Company, also the makers of Red Baron and Freschetta, both of which scored well in this challenge.    This pizza cost me just $2.67, which is on the lower end end of the bargain pizza price scale and it weighed in at 18.56 ounces.  The middle range of bargain pizza weights, is typically between 16 and 20 ounces.

So how was it?

For just $2.67 and a few added ingredients, this pizza rocks!  The pepperoni, although not authentic, had nice flavor and wasn't too greasy (typical of cheap pepperoni, excessively greasy).  The sauce had all the classic notes of a good pizza sauce, it wasn't just spicy ketchup (also typical of bargain brand frozen pizzas).  And the cheese, even though is a part skim milk mozzarella (skim milk sucks, jus' say'n) melted nicely and had good texture and flavor.  The crust, usually the deal breaker with these bargain priced frozen pizzas was spot on.  It held up to my added ingredients, staying light and flaky despite an extra two minutes of baking time to accommodate the extra heft of added ingredients.  The outside edge wasn't over baked and the middle underside was a nice, flaky bite.  YUM!  Tony's can handle all the doctoring you want to throw at it!

Doctored pizza, out of the oven

Tony's Pizzeria Style Crust Pepperoni Pizza gets 4 out of 5 Bachelor on the Cheap Stars.  With just one more pizza brand to sample, Tony's gives you the best bang, so far, for the pizza buck.  Tony's is definitely a repeat buy!

Stay tuned for more frozen pizza reviews, with a complete ranking of worst to best to wrap up the challenge.