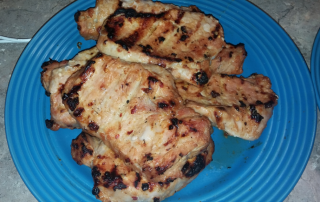 Pork is under-eaten and that’s a grill crime. Sure, ribs are popular, but there are so many other cuts of pork that a lot of folks just don’t consider but should. Ribs are fantastic, but so are pork roasts, chops, pork steaks, kabobs and more. They’re all so darn tasty!

My favorite pork cut is the boneless pork loin. You can treat it like a roast, cut it into chops, slice it thin for grilled sandwiches or chunk it up for kabobs. It’s cheap, delicious and a bonus is its flavor versatility. It absorbs marinades/sauces well and works great with just about any chicken recipe. Try using pork loin instead of that chicken breast in your favorite chicken recipe, you’ll like it!

Meat Temp for Pork:  Grill pork until the meat thermometer hits the 145 degree mark.  Remember to let the meat rest after pulling from the grill!