There are too many sub shops out there - so who makes the best subs? Day 2 Lunch: Schlotzsky's

So in the name of 'Food Science' (cough), I will be undertaking the next Bachelor on the Cheap Challenge:  Who makes the best subs?  I'll be going through the restaurant list, one meal at a time, sampling sub sandwiches from the all national chains.....  What?  Eat nothing but sub sandwiches for lunch AND dinner?  Like I said, done in the name of 'food science'......

Who has the best sub sandwich?  The worst?

For my third sandwich of the challenge, I headed to Schlotzsky's, a well renowned deli menu focused restaurant.  Needing to stay as consistent as possible in the type of sandwich I'm ordering for this challenge - wheat bread, similar meats, same types of veggies and dressings - I went with the Schlotzsky's original, a 'medium.'

Now some people might argue that because Schlotzsky's doesn't make sandwiches using a traditional 12' inch length 'submarine' sandwich roll that they don't qualify as a sub shop.  Hogwash!  Submarine sandwiches go by many names, such as hoagie, hero, grinder, poorboy, battleship sandwich and many others.  And no, such a sandwich is not restricted to a roll that loosely mimics a submarine.  It's best described as a length of bread or a roll filled with meats, cheeses, vegetables and condiments.

So now that we have the definition out of the way, how was my Schlotzsky's Original? 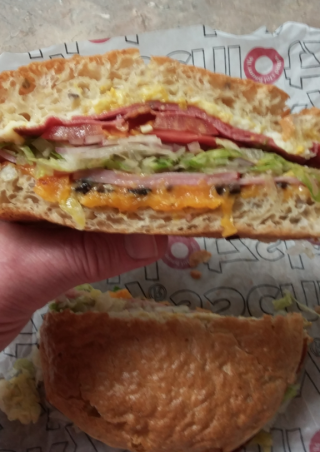 Good, but not great.  Here was my initial take-away with the first bite:  It was a bread sandwich.  The bread to meat ratio was, well, all bread.  I think there were just four thin slices of meat in this sandwich.  The flavors were there, I got the meat, the fresh produce, the nice notes of the special sauce, the warm toastiness of the bread......  There was just too much bread.

Going into the restaurant to place my carry-out order, I was the only customer in the joint when I was greeted at the counter.  None of the staff however was really wearing any smiles and I left with my order in about ten minutes.  I understand the toasting conveyor takes time, but 10 minutes in an empty restaurant?  I paid $6.44 for my medium sandwich.  That's a Bachelor on the Cheap friendly price, but then again, it was mostly bread.

This was a big sandwich, but it was for the most part a bread and veggie sandwich with just four slices of meat to speak of.   Don't get me wrong, it was tasty meat, there just wasn't enough of it.  Overall, there were some nice flavors in the sandwich but with the shortage of meat it was incomplete.  Nice bread Schlotzsky's, but that's not really what I ordered.  Schlotzsky's gets 2 out of 5 Bachelor on the Cheap stars.  Did I mention it was mostly, bread? 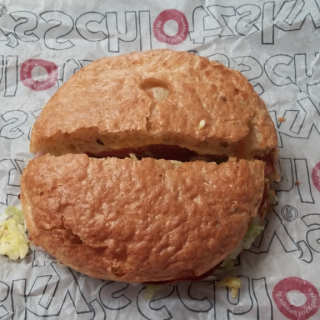