There are too many sub shops out there - so who makes the best subs? Day 2 Dinner: Jimmy John's

So in the name of 'Food Science' (cough), I will be undertaking the next Bachelor on the Cheap Challenge:  Who makes the best subs?  I'll be going through the restaurant list, one meal at a time, sampling sub sandwiches from the national chains.....  What?  Eat nothing but sub sandwiches for lunch AND dinner?  Like I said, done in the name of 'food science'......

Who has the best sub sandwich?  The worst?

For my fourth sandwich of the challenge and dinner time, I headed to Jimmy John's the #2 sub shop in the nation based on number of locations.  They focus on making cold sub sandwiches, no toasting.  They also do the scooping out the guts of the bread thing, to enhance the bread to meat ratio.  I don't have a problem with that, I actually prefer the bread scooped, but I'll get into more details about this in a bit.

I don't know if the two gentlemen taking my order and preparing my sandwich were distracted by something else, but goodness gracious the music in the joint was far too loud (I was the only customer in the place shortly after 5pm on a Sunday) and they just didn't listen!   I ordered the

A not cut sandwich, so much for customer preference huh JJ?

Vito, which is described on the website as:  Jimmy John's "Vito" Italian sub features genoa salami, provolone, capicola, onion, lettuce, tomato, and an Italian vinaigrette on French bread.  Now here's where Jimmy John's dropped the ball and failed to address customer needs.....  I ordered the Vito on wheat, I got white.  They didn't ask if I wanted it scooped, they just did it.  They didn't ask if I wanted to customize the sandwich, that bread was scooped and assembled before I could say I wanted some mayo and mustard added to that....  I also like my sandwich cut in half, I wasn't asked.  But since this is an evaluation of sorts, I let things ride.  Sure, Jimmy John's is freaky fast, perhaps it's because they don't stop to listen to their customers and ensure the customer is getting exactly what they want!  It was like these guys wanted me in and out of there 'freaky fast' so they could go about doing something else probably not restaurant related.  Hey Jimmy John's, what is the point of boasting the ability to customize your sandwich if you're not even going to let it happen? 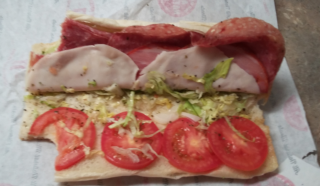 Despite the prepared rush, the sandwich was good.  The white bread I didn't order had a nice outer crispy, flaky bite and the inside was 'pillowy' good.  The meats were spot on tasty but a bit meager.  The veggies were fresh, the tomatoes a nice juicy red, the little bit of lettuce and onion provided that little bit of crisp and the vinaigrette had a nice balanced tartness to it.  The provolone was a nice quality cheese, but if only the sandwich guys had asked me how I wanted to customize my sandwich instead of being so freaky fast focused - I wanted some mustard and mayo on that Vito!

I paid $7.03 for my sandwich and chips and I believe I was in-and-out of there in record time!  That's a Bachelor on the Cheap friendly price, but then again, I didn't exactly get the customized sandwich I wanted.

This sandwich had good flavor, but it could have been better and the service while fast, was otherwise inattentive, with tunnel vision.   For the second time today, the sandwich I wanted, isn't really what I got.  Jimmy John's gets 2 out of 5 Bachelor on the Cheap stars. 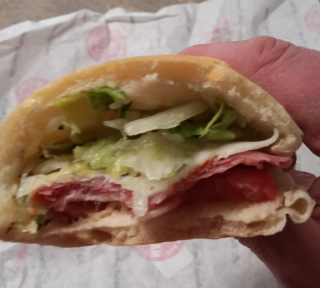 Meager on the meat

Hey, the guy I should mention that JJ sandwiches are all customizable in the sense that you can request certain things, like leaving bread in for the smaller subs, or taking bread out for the bigger subs (gourmet subs that have more meat). But the standard is that they take bread out for numbers 1-6 unless you request otherwise. It's optional but standard.