There are too many sub shops out there - so who makes the best subs? Day 1 Lunch: Subway

So in the name of 'Food Science' (cough), I will be undertaking the next Bachelor on the Cheap Challenge:  Who makes the best subs?  I'll be going through the restaurant list, one meal at a time, sampling sub sandwiches from the all national chains.....  What?  Eat nothing but sub sandwiches for lunch AND dinner?  Like I said, done in the name of 'food science'...... 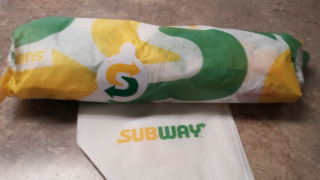 Subway, the "McDonald's" of subs

For my first sub sandwich of the challenge, I headed to the nearest Subway, the supposed King of the Sub Shop and they are - in terms of sheer number of restaurants and gross sales.  A 2016 restaurant sales report shows Subway at the top of this list with about 26,000 stores nationwide, the next closest truly sub competitor (pun intended) is Jimmy John's with slightly less than 2,500 locations.

So how was my Subway Sub?

Thinking most all sub shops will have a similar sandwich, I ordered a footlong Cold Cut Combo....  What's not to like in some cold cuts, bread, lettuce, tomato, some cheese, a little mayo, mustard, a common sandwich, right?  And as far as the sandwich size I ordered the footlong with consistency in mind, not all sub sandwich shops offer a six inch sandwich option.    Here's the description of the Cold Cut Combo from the Subway website:  The Cold Cut Combo is stacked with a trio of meats — ham, salami and bologna (all turkey based). It's topped with crisp vegetables and served on freshly baked bread. This combo has a little bit of everything. And it only costs a little bit of money: Get it as a Footlong for $4.99.

I frankly didn't realize the trio of meats was all turkey based, it's not in regular print on the menu board in the restaurant.....  There's strike #1. Ordering that sandwich on whole wheat, my order included lettuce, tomato, red onion, provolone cheese, mayo and classic yellow mustard.

The bread was tasty and the lettuce was fresh, but it was an overkill amount of rabbit food....  Not a good veggie to meat ratio, all turkey based meat by the way, not REAL salami, not REAL ham, not even REAL bologna!  The tomatoes were not exactly bright red and juicy with flavor and Subway now only puts ONE slice of cheese (provolone) on a footlong sandwich!  One?  Really?  The less-than-red/juicy tomatoes and skimpy cheese were strikes #2 and #3.  And that ladies and gentlemen, is why you can get a footlong at Subway for just $4.99.

This wasn't a bad sandwich, but it wasn't a good one either.  It was, "eh."  And I've had this particular sandwich before and I enjoyed it much more on a previous visit.  Chalk it up to better assembly I guess, more cheese, mayo and mustard (and less lettuce) perhaps? The price was right but it under-delivered in flavor.  The key question then, "Is it a repeat buy?"

The service was good, the staff was friendly and I was in and out of the restaurant with my carry-out order in a reasonable amount of time, but the sandwich, was again, "eh."  Subway's Cold Cut Combo gets two out of five Bachelor on the Cheap stars.  Inconsistency is a bad thing.