Arby's Bourbon BBQ Brisket Sandwich is not worth the price 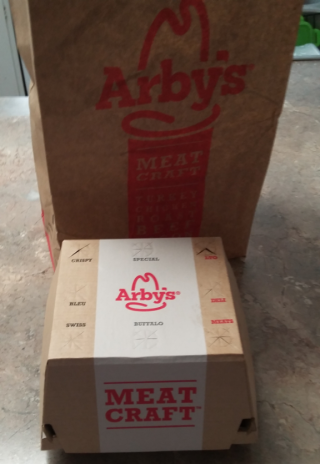 I'm a grill enthusiast, a BBQ lover, I've even gone to school to become a certified Competition BBQ Judge - yes, really, there is such a thing.  So when Arby's hyped up a Bourbon BBQ Brisket Sandwich, I had to jump on it.....

Here's the description from the restaurant website:  Barrel-aged Kentucky bourbon in the barbecue sauce, bacon that gets brown sugared each morning, and brisket that’s smoked for 13 hours. Throw in some natural cheddar and crispy onions and you’ve got yourself Arby’s most time-consuming sandwich.  Those ingredients again in bullet format:

I'm not sure what a 'Star Cut Bun' does for taste, OK, I am sure - NOTHING - but it sounds good and supposedly makes things 'look' purdy, right?......  But the 'purdy' aside, let me tell you something, this sandwich does NOT deliver on the hype!

I usually leave the following question for the very last thing on my reviews:  Is it a repeat buy?  Not just no, but Hell NO!  I had to put that out there right here, right now, because this sandwich is an insult to BBQ.

This sandwich was a huge disappointment.  The brown sugar bacon, was an overkill of brown sugar.  What you want in brown sugar bacon is for that sweetness to lightly kiss the bacon, to compliment the bacon, like an affectionate peck on the cheek.....  It did nothing of the sort, it overpowered everything, the bacon AND the sandwich!  Whoever cooked up the bacon piled on WAY too much brown sugar, it overwhelmed each bite, it was just TOO much sugar, a crumbly, sugary, almost cotton candy-like bite in fact.  I wanted to enjoy brisket and bacon when eating this sandwich, but what I got was grainy sugar.  The BBQ sauce was good, but also over-hyped, there wasn't a real bourbon flavor in it and those so-called 'crispy' onion strings, weren't crispy at all.  Can you say, "Mush?"  Yes, yes you can.  And the slice of cheddar - normally a perfect mate with BBQ - got lost in the brown sugar rush and the mush of those onion strings. The portion of brisket was good and the meat was on point, but it took a backseat to all the flaws in the sandwich. 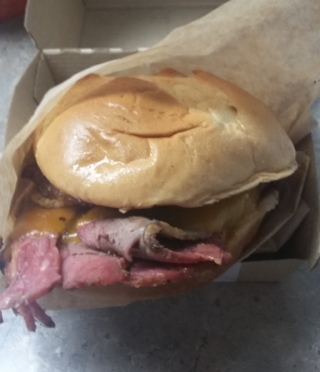 This sandwich is NOT a repeat buy

The Arby's Bourbon BBQ Brisket is all talk and no walk.  I paid $5.99 for this sandwich and I paid way too much.  I'll say this, the brisket was good, everything else, not so much.....  And a 'Star Cut Bun' is what exactly?  The sandwich gets just two out of five Bachelor on the Cheap Stars.  I've written this before:  Outside of roast beef (and potato cakes), Arby's fails to deliver.  Arby's most "Time Consuming Sandwich" huh?   Ha!  They haven't spent enough time, or perhaps, the guy they let spend so much time on it needs to be fired.  The sandwich is being offered as a "Limited Time Offer".....  That's probably a good thing.

Totally disagree! BBQ is an individual thing, what one enjoys another does not. I think this sandwich is quite good.

GrannyK, you must have a sweettooth, it seems you don't know what good BBQ really is.

ehhh cheese on any meat sandwich except burgers are a disapointment