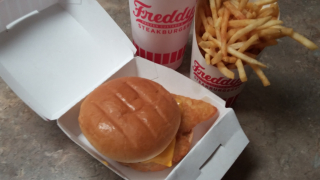 So I had Freddy's Frozen Custard & Steakburgers and their version of a crispy fried fish sandwich for lunch and it was quite good!  Advertised as two fillets of premium wild-caught Alaska cod, those fillets are topped with a slice of American cheese and the toasted bun is dressed with the classic Freddy's sauce which is mayonnaise, ketchup, pickle juice and Freddy's seasoning...  The sauce is basically a ramped up version of Thousand Island dressing with a better finish and coupled with that slice of cheese is a nice change of pace from a classic tartar.  The best part of this sandwich, the fillets were crispy with each bite, as they should be.  The fish to bun ratio was good and I enjoyed every mouth full, unlike most other fish sandwiches I've sampled so far during the course of this challenge.  The Freddy's version of a crispy fried fish sandwich was cooked properly, seasoned properly and served up promptly, made to order.

I paid $7.51 for the typical combo meal, sandwich/fries/drink.  Freddy's fish sandwich gets four out of five Bachelor on the Cheap stars, it's a repeat buy.

So far, I've eaten at five restaurants and sampled their version of a crispy fish sandwich, but I have I sampled the best fast food has to offer yet? 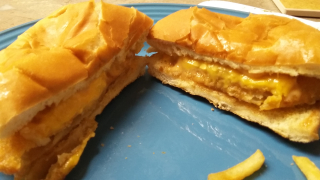