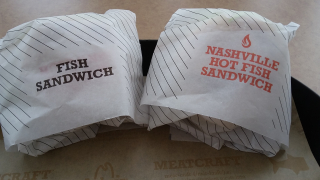 It's Day Two of this Bachelor on the Cheap Challenge and for lunch I decided on the Arby's version of a crispy fish sandwich and since they've got a $5 deal for two fish sandwiches, so I ordered a Nashville Hot Fish Sandwich to go with it.  Bonus, right?

Simply named (and what else would you expect, it's a fried sandwich....), the Crispy Fish Sandwich is a classicly prepared Alaskan Pollock fillet crispy-fried to a nice golden brown, topped with tartar sauce, shredded lettuce and served on a sesame seed bun.​  The Nashville Hot Fish Sandwich also features the crispy, Alaskan Pollock fillet, but it's coated in a spicy seasoning.  Also served on a sesame seed bun, the sandwich includes dill pickle slices, lettuce and Parmesan peppercorn ranch sauce.

So does Arby's do fish sandwiches as well as they do roast beef?

Nope.  You know how their new slogan is "We have the meats?"  They don't have the fish.

I tried the Nashville Hot Fish Sandwich first.  I was disappointed.  To repeat, I love a good fried fish sandwich and I also like a little heat, so I was really looking forward to that combination....  Winner, winner fish dinner, right?

Nope.  While that Nashville Hot Fish Sandwich did provide that little kick I was looking for, it lacked that crispy crunch.  Maybe it wasn't in the fryer quite long enough, the preparation wasn't quite right, but nonetheless it lacked that definitive crunch.  The restaurant wasn't all that busy at 1:45 in the afternoon, my sandwich was made to order, not already under a heat lamp.  The pickles and lettuce were nice texture accents to the fish, but the Parmesan peppercorn ranch sauce actually took away from the fillet.  When I eat something like this I really want to embrace the heat infused into that breading.  Arby's should have kept things simple with just a straight tartar sauce for that cooling-of-the-heat effect.  That flavored Ranch just complicated the heat, rather than complimenting it.  It's a big sandwich, the fish fillet to bun ratio is good, but overall, this sandwich comes out flat.

Arby's version of a classic crispy fried fish sandwich is a nice attempt, but the sandwich is just a good, average rendition, rather than an extraordinary one.  This sandwich provided far more crunch than the Nashville Hot, so the preparation was spot on with this fillet.  The tartar sauce, lettuce and sesame seed bun all complimented the fish nicely.  Again, this was a good sandwich, but I've had better.   For fast food, Dairy Queen puts out a better fish sandwich. 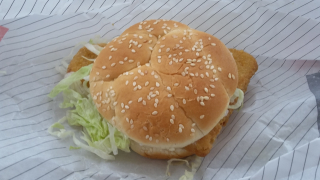 Arby's gets 3 out of 5 Bachelor on the Cheap stars for its attempt at fish sandwiches.  You get full on just $5, but the flair, just isn't there.  You don't have to mix and match the sandwiches to take advantage of the Arby's deal.  If I had to do it over again, I would get two of the regular crispy fish sandwiches, the Nashville just doesn't deliver.  Bottom line, I'm not going back to Arby's for a fish sandwich.

So far, I've eaten at three restaurants and sampled their version of a crispy fish sandwich, but I have I sampled the best fast food has to offer yet?