Who has the best fast food fish sandwich? - Day 4, Lunch - 2 Fish Sandwiches at Hardee's for $5 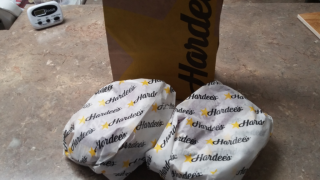 I headed to Hardee's today for lunch.  They have a two fish sandwiches for $5 deal going on right now, it is after all the season of Lent.  The Hardee's version of a crispy fish sandwich features a beer battered cod fillet and fried until  crispy.  It's a classic preparation coming with lettuce, tartar sauce and served on a toasted sesame seed bun.   These were good sandwiches.  The fillets were crispy throughout, not just on the edges, the fish to bun ratio was spot on, the lettuce fresh. The only knock I have is the tartar sauce.  While it was nice and creamy, it was a bit boring.  Hardee's makes a good fish sandwich, but it's not the best I've had thus far.  Is it a repeat buy?  Yes, especially for the price with this current deal.  My total price for the two sandwiches, no fries, no drink, was $5.40.  That's Bachelor on the Cheap friendly!  The Hardee's version of a crispy fish sandwich gets three out of five Bachelor on the Cheap stars. 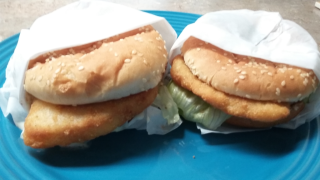 So far, I've eaten at seven restaurants and sampled their version of a crispy fish sandwich, but have I sampled the best fast food has to offer yet?