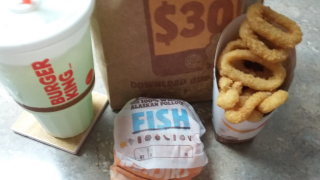 So how does Burger King's "Big Fish" sandwich stack up?

I went to Burger King for dinner in this quest for the best fast food fish sandwich.  I cannot recall to have ever sampled Burger King's version.  I regret that I did on this night.  When I took the top lid of the fish sandwich I ordered I thought I was at McDonald's for a second....  It was another square 'patty' of processed fish! Here's how the BK fish sandwich is touted on the website:  Big Fish Sandwich...  A delicious golden-crisp catch.....  Our premium Big Fish Sandwich is 100% White Alaskan Pollock, breaded with crispy panko breading and topped with sweet tartar sauce, tangy pickles, all on top of a toasted brioche-style bun.  LOL, that's funny!  The sandwich isn't big, the fish isn't golden brown nor is it crispy, the lettuce wasn't fresh and I'm not talking wilted from the heat of the fish either, I'm talking brown edges old.  The fish patty was over-fried, as in dead, shoe-leather chewy on the edges.  The fish patty to bread ratio was OK, in fact, if there is anything positive to say about the sandwich, the toasted bun was good.  The tartar sauce was a little different and not in a good way....  This was just a dead sandwich, I couldn't finish it.  It's NOT a repeat buy and so far, this is the worst fish sandwich I've sampled in this challenge.  To sum it up in two words, "It sucked."  OK, two more words, "Really Bad."  Chalk up part of my distaste for the sandwich to poor execution and preparation, but in the final analysis - it's a processed fish product and doesn't measure up to a fish fillet sandwich.  Burger King has seriously hyped up the description with rose colored glasses.  There isn't anything premium about this offering.....  Well, I did pay a premium for poor quality. 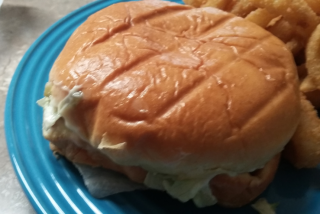 I shelled out $7.73 for a combo meal, sandwich, up-sized to large onion rings instead of fries (I'm not a fan of BK fries) and a drink.  That's over-priced - it's processed fish, not a fillet - and NOT Bachelor on the Cheap friendly.  Burger King's version of a crispy fish sandwich gets just one out of five Bachelor on the Cheap stars.  A processed, square fish patty, BK, really?

So far, I've eaten at six restaurants and sampled their version of a crispy fish sandwich, but have I sampled the best fast food has to offer yet?

I apologize for the picture quality here, but you can see the fish to bun ratio and if you look closely, the brown edges on the lettuce.  I had to pick some off!