- New York Reuben - This is the chain's regular menu Reuben sandwich that was debuted last year, but with a double portion of corned beef.

I decided to check out the Miami Cuban sandwich while out-and-about running some errands during the lunch hour and seeing, "Try our new Miami Cuban Sandwich" on the Arby's restaurant marquee board, so I pulled in.   Yes, Marquee boards work..... 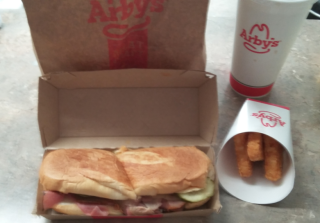 A great Miami Cuban Sandwich is made with smoked or slow-roasted ham, pork loin, Swiss cheese, a generous handful of tart dill pickles and a slathering of yellow mustard.  All that goodness is served up on a crusty Cuban bread and lightly pressed.

So how is the Arby's version?  It's not legendary.  A good Cuban is hard to put back down on the plate, you want to keep going after it, bite after bite.  But what Arby's puts out, got put back down on the plate quite a bit in reaching for more potato cake instead.....  The meats in the sandwich were average, slightly under-portioned, with the smoky element Arby's promises in the pit-smoked ham a big miss and the roasted pork is juicy but under-seasoned.  The Swiss cheese provided that mellow, slightly nutty  taste you're looking for and the pickles and mustard were generous in portion but to the point of overpowering the sandwich.  The tartness and tang of dill pickles and classic yellow mustard is a great combination but the ratio to the meat was too much.  This is supposed to be a Cuban, not a mustard and pickle sandwich.  Then there's the bread.  There was nothing crispy or crunchy about it.  It was a soft roll.  If you look real close, you can tell my sandwich was put in a press (for maybe 2 seconds?) - there's an ever-so-slight crease on the top - but there was no 'toasted' visual to the bread and you couldn't tell it was pressed by touch.  Again, it was just a soft roll. That's a shame to, because putting some crispy texture on the outer crust is what helps make a Miami Cuban sandwich, a Miami Cuban sandwich! And then there was the price.  My meal, the New Miami Cuban sandwich combo, with potato cakes instead of fries and a medium drink came to $9.55 after tax.   That meal, was overpriced.  Sadly, the best thing about it was the potato cakes.  They were fresh, hot and golden-brown delicious.  I don't go to Arby's and NOT order their potato cakes.  Jus' say'n.  Arby's is the fast food King of roast beef (and potato cakes)....  Miami Cuban sandwiches, not so much....  They should stick to what they do best.

Didn’t think it was a Real or made up version of a Real Cuban Sandwich! The real thing is hard to come by, but an Authentic Original is next to impossible! Nice Try Arby’s! It’s NOT THE MEATS! Nice Try!