Straight whiskey is generally defined as distilling a fermented cereal grain mash (it could be corn, rye or barley) to create a spirit and then aging it in oak barrels for at least two years.  To note, corn mash is typical of American whiskey, rye mash is most common for Canadian whiskeys and Scotch is made with barley.  The taste of straight whiskeys is sometimes described as harsh by some, but it's the oak, or woody, aged taste that straight whiskey drinkers appreciate.

A blended whiskey is the product of blending different types of whiskeys, the mixing of one or more higher quality straight or single malt whiskeys with less expensive spirits which are "grain neutral," essentially tasteless and odorless alcohols, similar to vodka.  Blends can also have other ingredients such as caramel coloring and flavorings. The result is usually a 'sweeter' whiskey, rye or scotch and less of the "wood" taste.  Blended whiskeys are also less expensive. 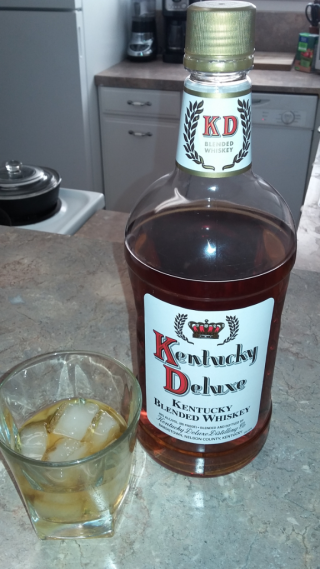 Being a blended guy, my go-to brand is Kentucky Deluxe.  It's very drinkable on the rocks and provides a nice base for any mixed drink calling for whiskey.  I like blended whiskeys for that sweeter element to them, and then yes, there's the price.

Whiskey blends are less expensive, with the likes of Canadian Mist and Seagram's Seven going for around $11 or $12 a bottle.  And the blends in rye and scotch are cheaper too with a rye blend like a bottle of Cask & Crew going for around $22 and a scotch blend such as Cutty Sark costing about $21.

My go-to, Kentucky Deluxe, goes for about $9 a fifth and a "Texas Fifth", a.k.a.,  a half gallon bottle, goes for about $16.  Yes, it's bottom shelf stuff, but I'm here to tell you that in a mixed drink blind taste test between Canadian Mist and Kentucky Deluxe.....  You can't tell the difference and that $2 or $3 I save can go towards some citrus to garnish those drinks with.

To make gomme start with 1 cup water and add 6 whole cloves, 12 whole allspice, 24 black pepper balls and bring to rapid boil for about ten minutes or until about half the water has evaporated.
Let cool and strain through screen type sieve.
Add this to 1 cup pineapple juice, 2 cups sugar, 1 loose cup brown sugar, 1/2 tsp ginger, 1/2 tsp nutmeg, 1 tsp cinnamon.
Cook on medium heat untill all sugar is melted but do not let it boil, Remove from heat and add 1 oz Kentucky Deluxe to keep sugar from crystallizing. Stores in refrigerator for about a month.