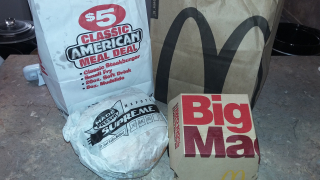 So who has the best Fast Food burger in town?

Today's battle is between Spangles and McDonald's.

Regular readers know that I've been critical of Wichita based Spangles for not having a signature sandwich, for wasting marketing dollars in promoting a salad instead of promoting what could really elevate them to the next level.  Spangles remains a small regional (within the state of Kansas) restaurant and not a nationally recognized restaurant because they don't have a signature sandwich.  Well, they have one, they just don't promote it like they should.

So in doing Spangles' job for them, I give you a burger battle - Spangles Gourmet Supreme vs. McDonald's Big Mac.

Without question everybody and their brother knows that the signature sandwich for McDonald's is the Big Mac.  It's a go-to for many people.  There is a reason most folks know the tune to "Two all beef patties, special sauce, lettuce, cheese, pickles, onions on a sesame seed bun...."  McDonald's promotes the heck out of it and as a result, people are drawn to it, they buy it.  Right now in fact, McDonald's is running a buy one, get one free Big Mac deal.  It's keeping their signature sandwich in your face.  Yes, it's very deliberate, but it's marketing that works.  Remember this, McDonald's used to be a small regional restaurant at one time too.

Spangles management on the other hand seems to have forgotten what the signature sandwich is for their own restaurant, what turned a local restaurant known as "Coney Island" in 1978 into a state of Kansas regional restaurant in 1984.   Well Spangles, it's 2017 and you're still stuck in Kansas.   Why?  Because you've dropped the ball on marketing just how good the Gourmet Supreme is.  Quit messing around with marketing an oriental salad, you're a burger joint for crying out loud!  It's time you started taking on the big boys at the top of the Fast Food chain, because your food is every bit as good if not better than theirs is.

The Gourmet Supreme vs. the Big Mac

To use the Spangles tag line, "It just tastes better."

It's true, it does.  Not only does the Gourmet Supreme taste better than the Big Mac, so to do the french fries from Spangles vs. McDonald's. 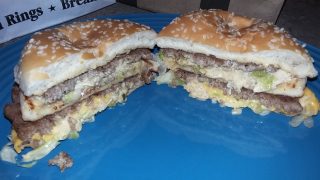 But check this out, look how McDonald's promotes their signature sandwich on their website:

And now check out how Spangles promotes the Gourmet Supreme on their website: 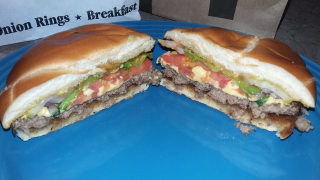 Pretty unremarkable right?  And the same things goes for any television marketing.  McDonald's talks about sizzle, while Spangle's doesn't even talk up the Gourmet Supreme, and it's the better sandwich!  For the record and again, doing Spangles' job for them, the Gourmet Supreme is a 1/3 pound seasoned Angus Beef burger, classically served with fresh lettuce, cheese, tomato, pickle and red onion.  That 1/3 pound seasoned Angus Beef bite and those fresh toppings just tastes better!

To prove my point, I bought a Gourmet Supreme and a Big Mac for lunch today in the name of food science and marketing, a simultaneous taste test and comparison. 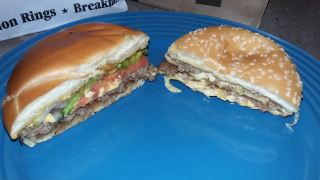 When is the last time you had a Gourmet Supreme?
If you've never had one, isn't it time you tried one?
And here's the bonus.  Remember when I mentioned that Spangle's fries are better than McDonald's?  It's true.  It's a perfectly seasoned crunchy on the outside, tender on the inside french fry bite!
If I was Spangles, I'd be running a TV ad directly attacking McDonald's....  Do a consumer taste test, Gourmet Supreme vs. Big Mac and fry vs. fry.  Make it a value meal challenge to include a consumer line something along the lines of, "Why eat McDonald's fries, yours just taste better!"
In the battle of the Fast Food Burger, the Spangles Gourmet Supreme is better than McDonald's Big Mac.