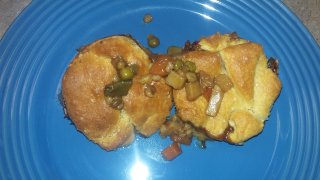 Bachelor food, go-to food when you don't really feel like cooking, don't feel like getting into the vehicle and driving to a restaurant......  So what do you do?  Pull out a Banquet pot pie.

Let me clue you in on something you can make easy peasy, something VERY affordable, something WAY better than a Banquet brand pot pie......

All you need is a can of Campbell's Vegetable Beef Soup and a container of Pillsbury Cresent Rolls.

Grilling on a budget

Here's a great recipe if you're on a tight grocery budget, costing less than $10 to prepare.

And tight budget or not, this is just a flat out great grilled hot dog recipe! 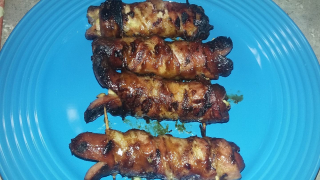 Mix the first six or seven ingredients.  Slit the hot dogs, cutting them almost end-to-end and about ¾ the way through.  Stuff with the ham mixture.  Wrap the stuffed hot dogs with bacon and secure with tooth picks on each end.  Grill over hot coals, giving them ¼ turns and brushing them with BBQ sauce (and optional BBQ/Louisiana Hot Sauce blend) until the bacon is crisp.  Serve in toasted garlic buttered hot dog buns. And um, don't forget to remove the toothpicks.....

In fact, it's quite tasty!

Taco Bell's heavy advertising for this new menu item worked, it lured me in.  I was intrigued on how a 'chicken shell' would measure up, so for dinner the other night, off to Taco Bell I went after work. 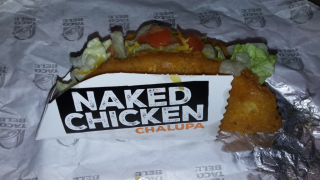 My Naked Chicken Chalupa order was served up fast and fresh.  I honestly didn't really know what to expect with that first bite, how the chicken would play with the lettuce, tomato and cheese......   It was pleasantly, crunchy delicious!  The marinated, all white meat chicken was flavorful, juicy and did I mention, crunchy delicious?  The avocado ranch dressing is a perfect compliment to the 'taco'.    Taco Bell has done this one right, the 'shell' is indeed savory, it's a perfect blend of crunch and tender chicken with each bite.

If you're curious about Taco Bell's Naked Chicken Chalupa, go satisfy that curiosity and that hunger at lunch today.

The Chalupa gets a fast food Bachelor on the Cheap rating of 5 stars!

I've heard a lot of people say, "I can't afford to be a member of a wholesale club."

I would argue that you can't afford NOT to be a member.

Sure, you have to pay a membership fee, but you really do make up for that annual fee payment through savings the club offers.

The nation's top two wholesale club outlets are Sam's Club and Costco, with annual base memberships costing $45 and $55 respectively.

Yes, you'll save far more than that over the course of a year.

I've held a membership at both Sam's and Costco.  They are both very similar, although Costco tends to play more to the organic loving crowd when it comes to groceries.  I currently have a membership with Costco, but strictly for proximity reasons.  Costco is closer to where I live.  The savings at either club, is essentially the same.  They are able to provide you savings as a result of buying large volumes of product. 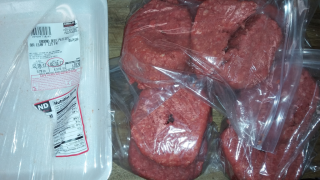 Reason #1 to have a club membership:  You save BIG on groceries.  Yes, you'll have to buy in bulk, which may not sound like a good thing for a bachelor or for somebody who doesn't do a lot of cooking, but there's no need to burden yourself to restrictions like that.  Think outside the box.  If you don't cook, you still save BIG on snacks and prepared/ready-to-eat foods.  If you don't have a lot of refrigerator or freezer space, you can still save big on items that aren't perishable.

Here's a savings example, ground beef.  The days of getting good ground beef for $2.99 a pound are fast becoming a thing of the past.  When the mainstream grocery store puts ground beef on sale, yes, it's for $2.99 a pound, but the sale is infrequent, for just one perhaps two days and it's usually for the lowest grade ground beef they have.  It might be for a 70/30 (70% meat, 30% fat) grind - YUCK, too much fat, A LOT of shrinkage and grease.  The mainstream grocery store may offer a sale on an 80/20 grind and that's decent, but know that an 80/20 grind is great for burgers, but it's not a good grind for all-purpose applications.  An 80/20 grind still has too much fat for things like casseroles and one-dish meals.   What you need is a good all-purpose grind that's  good for a number of dishes, for casseroles, one-dish meals and simple comfort foods like meatloaf.

Costco, where I shop, offers an 88/12 grind at just $3.19 a pound.  That's not a sale price, that's an every day price.  How much is a similar grind at a mainstream grocery store you ask?  $3.99 and up.  Buy a five pound package and you save $4 at Costco vs. buying the same thing at the mainstream grocery store.   And surely, you've got room in the freezer for that!  Today I bought a package of ground beef weighing almost 6 pounds.  I portioned it out into six freezer bags and now I have ground beef to make meals with over the next few weeks.

I also bought 7.25 pounds of boneless chicken thighs for just $1.89 a pound, as well 5 pounds of boneless pork shoulder cut country rib style for just $2.29 a pound.  Each of those meats are about 20 to 30 cents a pound cheaper than the normal every day price at a typical grocery store.  We're talking a savings of around $3 for that same 12+ pounds of meat!

So to sum, for three types of meat; beef, chicken and pork, I saved around $7 shopping at Costco over buying the same thing at a mainstream grocery store.  Sure, you might see that kind of savings IF a mainstream grocery store has a sale, but if you're not a sale shopper, the point is mute and even if you do pay attention to the sales, how often do they really happen to make it worth your while, vs. low prices at Costco, every day?

And here's another way to look at it, especially for those of you who don't want to or don't like to cook:

I spent $75 today at Costco on meats.   I've got over two weeks worth of entree items to work with in my freezer now.  That same $75, buys you maybe 10-12 meals at fast food joints.  What makes more sense, three meals a day, that's breakfast, lunch and dinner for better than two weeks for $75......   Or up to 12 dinners for the same amount?

Reason #2 to have a club membership:  You'll save big on gas!  The price for gas typically runs at least 10 cents a gallon cheaper at Sam's Club or Costco than it does at the typical convenience store.  And even if you have one of those loyalty cards at that mainstream grocery store that also sells gas, you'll still save 5 cents or more per gallon!  Being a club member means a savings of between $1 to $2 per tank fill up.   That may not sound like much depending on how much you drive, but think about it over the course of a year.....  How about an extra $50 - $100 bucks to do something fun with?

Reason #3 to have a club membership:  Both Sam's Club and Costco sell so much more than groceries and gas.  They offer furniture, office supplies, cleaning supplies, kitchen gadgets, home entertainment, clothes, outdoor fun, books and much more.  Like as for the groceries and gas, the clubs can pass on savings to you the customer, because of their volume buys in product.

Spend the $45 - $55 for a club membership, you'll get that back AND MORE in savings over the course of a year, EASY!  You'll probably realize that savings in the first three months.  Seriously.