Buy your shoes at Kohl's, the store rocks!

Think you're getting a good deal buying shoes at places like Payless ShoeSource?

Those so-called 'bargain' $30 shoes are only going to last you 6-7 months.  The stitching is going to come apart and the tread will wear thin long before it should.

Buy some quality, name brand shoes at Kohl's instead.  The only thing you have to do is watch for sales, which they have fairly often and better yet, a clearance!

About seven months ago, I went cheap and bought a pair of black bargain brand casual oxfords for work.  They cost me about $30.  At the time I thought, "What a deal!"  But the saying, you get what you pay for holds true here.  I don't think I wore them three months when the stitching started to pop, creating a few holes and the tread was gone at the six month mark.  After a recent heavy rain storm and an almost fall (wet asphalt and no tread on the shoes = slick), needing to buy a new pair of shoes wasn't just something on a list, it became must do reality.

Enter Kohl's.  I've bought shoes from Kohl's before, I already knew they had the sales that make it worth your while, but usually, for me anyway, that typically means getting a pair of $75 shoes, for $50. 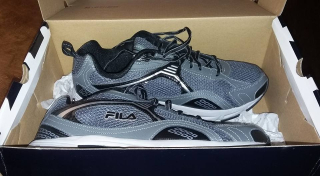 Not today.  Today I really scored!  I bought a pair of Fila brand running shoes, which normally list for $59.99, for just $17 on clearance.  I had reviewed the Kohl's website before I went shopping and found a pair of Skechers brand shoes I liked for $30 (normal price $64 but on sale) and that's actually why I went out there.  But it pays to browse.  Don't be the stereotypical male -  go in the store, find what you need, buy it, get out - take a look around.  In browsing a bit once I got to Kohl's (maybe 10 minutes?), I found the Fila 'Windshift' shoes and opted for those instead of the Skechers.  I didn't see that particular Fila $60 shoes for just $17 deal online, but I'm certainly glad I found such a deal by browsing in the store!

And here's the best part, these Fila shoes aren't going to start coming apart at the seams in just three months.  I will still have good tread at the six month mark.  At that $17 price, it kicks the $30 bargain shoe's ass!  Heck, I could spend $60 on two pairs of those bargain shoes, have them both worn out in about a year, and it still wouldn't measure up to the full price of the Fila's, which will still be going strong at 12 months of wear.

Spend the money on a good pair of shoes, even if you have to pay full price.  If they're on sale, that's just a bonus, a TRUE bargain.